During the first half of 2016 I spent a great deal of time focused on a new project that would bring together two of the main aspects of my working life; web design and snowboarding.

Since the year 2008 I have been a Snowboard Trainer / Examiner for the education body that qualifies snowboard instructors in New Zealand. Coincidentally, I’ve also been exploring the World of web design for about the same amount of time. This is the first project where those two aspect of my working life would come together seamlessly… an E-Learning environment for SBINZ.

The new platform is a member-only tool, so viewing it as a non-member isn’t possible unfortunately. However, here are a few screenshots as a wee taster… 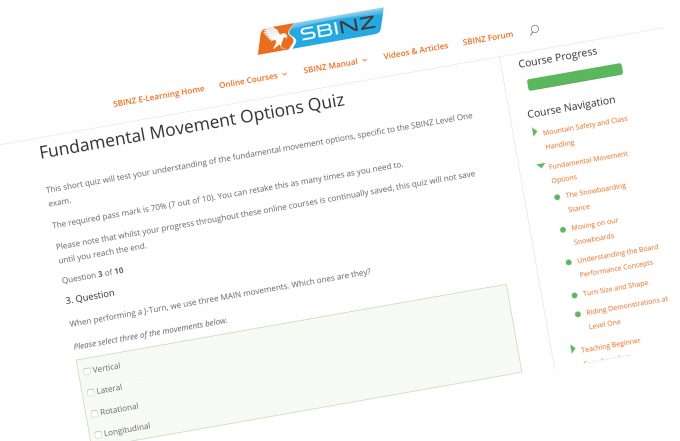 A module focused on rider analysis with video embedded

The design was intentionally done with a very “vanilla” style. We needed to keep it as simple as possible, to avoid unnecessary distractions for the user. We also need to allow room for a more organisation-wide branding update in the near future.

As the project leader, my role included the following:

The feedback from users has been incredibly positive since going live. As with most technology, we’ve had our teething problems, which are mostly conflicts in the user database and can be resolved quickly.

As an education organisation, we’re finding that the fundamental knowledge and understanding that candidates arrive to a course with has dramatically increased. Goal achieved!